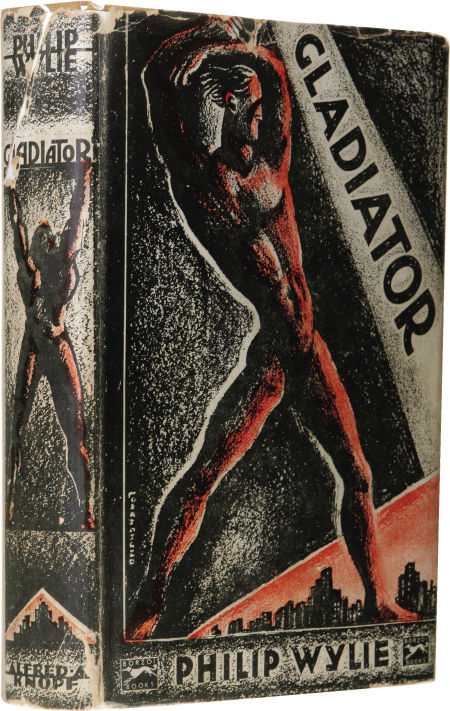 Here lay, in these pages, the Pulp Sci-Fi origins of Superman. Philip Wylie writes a tale of a Superman, but one whose origins are completely earth-bound. It’s been a while since I’ve read this one, but it was an excellent book.

In the early years of the twentieth century, Professor Abednego Danner is a scientist who is obsessed with chemically tinkering with the genetics of living organisms in order to breed animals that grow into their full genetic potential, and more. Professor Danner lives in a rural community in Colorado with his wife, a somewhat sour, religious woman. In his laboratory, Danner creates a serum that, when injected into a pregnant animal, will ensure that the offspring being carried, turn out to be “super” versions of their species.

In early experiments, a tadpole he was working with destroyed the fishbowl it was being kept in. In later stages of his work, Danner uses the family cat as a test subject, and she goes on to bear a kitten that is extremely intelligent, extremely tough, super fast, and super strong. At first, Danner thinks he can contain and control the kitten, but cannot; and it has been hunting cattle to feed itself, its incredible metabolism needing far more fuel than a normal cat’s would. In the end, the only way Danner can stop it is by poison.

But then, Danner knew his work was a success. He treated his pregnant wife, without her knowledge, and she gave birth to a son, Hugo. Hugo very quickly displayed traits of super speed, super strength, invulnerability, and high intelligence. Mrs. Danner is aghast at what her husband had done, but they stay together and raise the child very carefully, teaching him the same good values we know our own Clark Kent was raised with by Ma and Pa Kent. They teach him never to display his power, and never to show off with it, lest he become known, and marked out as a freak.

From here, the book’s theme seems to be that simply being a superman is no guarantee of happiness, nor is it of any use in making a better world. Young Hugo is bullied at school, because he knows not to fight back. And when he does become a football star, using a portion of his speed and strength, he ends up one day accidentally killing a fellow player in a college game. Wracked with guilt, he leaves school. He floats around, working as a prizefighter, and a circus strongman at a shore resort. He sleeps with numerous women, who seem automatically attracted to him, but who ultimately leave him, as he is “too perfect.”

Hugo joins the French Foreign Legion in WWI, and fights in the trenches. The fact that nothing less than a mortar shell has any effect on his skin comes in handy. But after the war, he leaves the Legion, having been subject to a berserker-like rage in the trenches when his friend was killed.

Over the course of the rest of his career, Hugo rescues a man from a bank vault, only to be accused of being a dangerous safe-cracker, and is fired from his job. He works at a steel mill, but is hated by his coworkers for his indefatigable pace of work, and threatened by the supervisors for showing up the men. He tries his hand at politics, but is only good as a goon and a frightener, and he learns that his physicality cannot affect anything of real substance.

Hugo spends time as a drifter, and eventually goes on an archaeological expedition with a scientist to whom he unburdens himself about his life and how miserable it’s been due to his extraordinary abilities. The scientist thinks he knows how Hugo could make use of his powers in the service of mankind, but– Alas!– one evening on a mountaintop, Danner is struck by lightning and killed.

It struck me that throughout most of his adult life, Hugo Danner was a self-absorbed, self-pitying fellow, rather like Anakin Skywalker. And Wylie took great pains to show how simply having super powers is no guarantee that one will be able to use them to effect “Good” in the world. Wylie seems to be using his book as quite the indictment of the social and political systems of the early twentieth century. And I was annoyed at how long Hugo Danner behaved like a sulking child, comforting himself over his failures by telling himself how superior he was to everyone around him.

Still, this is an excellent book, and does excellently well what good science fiction is supposed to do; that is, to examine and explore how human society would be affected if [technology X, powers Y, or the like] were real and present in our world.

It’s a very well written book, and I do recommend that you find it and read it. Even if only for it’s tangential relation to Superman and Doc Savage.

I was born, according to the official records, in the Year of the Ram, under the Element of Fire, when Johnson ruled the land with a heavy heart; in the Cradle of Liberty, to a family of bohemians. I studied Chinese language and literature at Rutgers University, New Brunswick. I spent some years in Taiwan teaching kindergarten during the day, and ESOL during the evenings. I currently work as a high school ESOL teacher, and am an unlikely martial artist. I have spent much of my life amongst actors, singers, movie stars, beautiful cultists, Taoist immortals, renegade monks, and at least one martial arts tzaddik. I currently reside in Beijing's Dongcheng district
View all posts by Michael Butchin →
This entry was posted in Books, Reviews. Bookmark the permalink.

This site uses Akismet to reduce spam. Learn how your comment data is processed.

"To sting people and whip them into a fury, all in the service of truth."

Truth Can Only Be Found In Silence, But Here We Go Anyway!

The Life of an Opera Singer, Cantor & Teacher